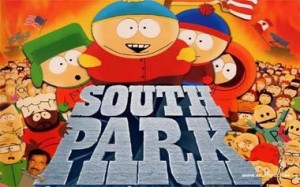 As I am one of the biggest fans of South Park, when I discovered this article on MSN TV News, I decided to re blog it immediately!

Here you can find a great article about Most Controversial ‘South Park’ Episodes just before the animated series begins its 13th season.

The 10 Most Controversial ‘South Park’ Episodes

EDITOR’S NOTE: THE FOLLOWING FEATURE CONTAINS VIDEO AND DISCUSSION OF AN ADULT NATURE.

Trying to choose the 10 most controversial “South Park” episodes is like trying to choose the worst Rob Schneider movie — there are just so many to choose from. But as the show begins its 13th season, on March 11 at 10 p.m. ET/PT on Comedy Central, we thought we’d round up the episodes that have generated the most publicity over the years. And there have been a lot of them. Right from the get-go, this scathing satire, centered on four kids from South Park elementary, built a reputation on being an equal-opportunity offender, leaving no stone unturned and no topic too taboo. Many learning institutions in turn banned the show’s merchandise from their grounds, and several countries have banned the show’s broadcast entirely (we’re looking at you, former Soviet Union), no doubt stoking the fires of its brainchildren, Trey Parker and Matt Stone. There were many amazingly offensive and amazingly hilarious episodes to go through, but we were up to the challenge of finding our 10 favorites, and we present them to you here with clips from each.

Episode: “Trapped in the Closet”
Season: 9
Controversy: The mother (or should we say motherf—er) of all controversial “South Park” episodes is no doubt this one, which skewers Scientology, Tom Cruise, John Travolta, and R. Kelly in one fell swoop. Dubbed Closetgate, Comedy Central, a network owned by Viacom, pulled a rerun of this Emmy-nominated episode, supposedly under pressure from Tom Cruise, who threatened to bail out of promoting his upcoming film “Mission: Impossible III,” which was being released by Paramount, a division of Viacom. Isaac Hayes, who had long performed the voice of Chef on the series, and who also happened to be a Scientologist, quit the show abruptly just days prior to this episode’s broadcast. He later returned, and this episode has seen multiple reruns.

Episode: “The China Probrem”
Season: 12
Controversy: The episode implies that “Indiana Jones and the Kingdom of the Crystal Skull” is a raping of the franchise by having the film’s star, Harrison Ford, literally raped several times in the episode by George Lucas and Steven Spielberg in an variety of famous movie rape scenes. Favorite “South Park” haters the Parents Television Council cited the episode for “exploiting the sensitive topic of rape for a trivial movie satire.”

Episode: “It Hits the Fan”
Season: 5
Controversy: Inspired by the saucy language of ABC’s “NYPD Blue,” the episode opens with the gang talking about “Cop Drama,” a network show planning to air a scene with an uncensored S-word in it. “South Park” then drops 162 uncensored S-bombs — that’s one every eight seconds — for the remainder of its 22 minutes, with a counter at the bottom of the screen keeping track of each one. But aside from the gratuitous use of language, the episode ponders a larger question: Why is it considered offensive when an animated comedy pushes the envelope via edgy language, while a serious drama doing the same thing is considered art? Another episode, titled “With Apologies to Jesse Jackson,” pulled a similar stunt using the N-word.

Episode: “Mr. Hankey, the Christmas Poo”
Season: 1
Controversy: A Russian Pentecostal organization demanded that the Russian government revoke the license of the nation’s oldest private entertainment channel after it aired this Christmas-themed classic from the show’s first season featuring a singing, hat-wearing turd. The organization’s appeal was flushed and the station’s license was kept.

Episode: “Jared Has Aides”
Season: 6
Controversy: After Jared Fogle, the spokesman for Subway restaurants, visits South Park to discuss his weight loss, the boys misunderstand his methods for losing weight. Fogle explains it was a series of appointments with his personal trainer and his dietitian, his aides, which the boys misinterpret as his AIDS. The rest of the episode’s plot revolves around Butters, South Park’s favorite overweight kid, and his abuse at the hands of his parents after they think he’s attempted a liposuction surgery on himself at home. Ironically, Comedy Central banned the episode, not due to its AIDS-related material, but due to its portrayal of Butters being abused by his parents.

Episode: “Scott Tenorman Must Die”
Season: 5
Controversy: Consistently voted one of the show’s most popular and most outrageous episodes by fans, “Scott Tenorman Must Die” is notable both for the appearance of the band Radiohead as themselves (most celebrities are impersonated on the show) and the depths with which Cartman will go to seek revenge. In this case, feeding the titular character chili made from the remains of his parents. It is also, according to Stone and Parker, the first and only episode to not have two plots.

Episode: “Terrance & Phillip in Not Without My Anus”
Season: 2
Controversy: Conceived as an April Fools’ Day prank, and fueled by the generous publicity received by the Season 1 cliffhanger, the second season premiere, which was intended to answer the question of who Cartman’s parents were, instead focused on an unrelated episode involving the show-within-the-show characters of Terrance and Phillip. Fans were outraged, and as such Comedy Central pushed Parker and Stone to quickly create the real episode, which they did, and which aired three weeks later.

Episode: “Bloody Mary”
Season: 9
Controversy: The Catholic League protested the episode because of its depiction of a Virgin Mary statue bleeding from its rectum. It originally aired on Dec. 7, 2005, the night before the Feast of the Immaculate Conception, a Catholic holiday relating to the Virgin Mary. There were conflicting reports that Comedy Central had agreed to not rerun the episode, however the network denies ever having agreed to such a demand. There was also outrage in New Zealand, where the nation’s Catholic Bishops’ Conference attempted, unsuccessfully, to stop the episode from airing.

Episode: “Hell on Earth 2006”
Season: 10
Controversy: In the episode, a guest at a Halloween costume party shows up as wildlife expert Steve Irwin with a stingray barb sticking out of his chest. After being confronted for wearing such a tacky costume, the guest turns out to be Irwin himself, and is subsequently removed from the party for not wearing a costume. The episode aired just weeks after Irwin died from having a stingray spine puncture his lung while filming a segment for a television show. Shortly after the episode aired, a friend of the Irwin family issued a statement saying the episode “goes too far too soon.”

Episode: “Cartoon Wars Part II”
Season: 10
Controversy: In 2005, after a Dutch newspaper published a series controversial editorial cartoons featuring the Islamic prophet Mohammed that sparked violence in several countries, Comedy Central censored a photo from the episode that depicted the prophet appearing on an episode of “Family Guy.” In its place, the show ran a title card reading “Comedy Central has refused to broadcast an image of Mohammed on their network.” Aside from the political overtones, the episode also takes aim at “Family Guy” and its writers, as well as a network executive named Doug, presumably a dig at Doug Herzog, president of Comedy Central.

Blogged with the Flock Browser

This site uses Akismet to reduce spam. Learn how your comment data is processed.